There are several notable shifts in ranked positions of weakness types from last year's list, including several weaknesses dropping away or making their first appearance in a Top 25.

The biggest downward movers are:

New entries in the Top 25 are:

Entries that fell off the Top 25 are: 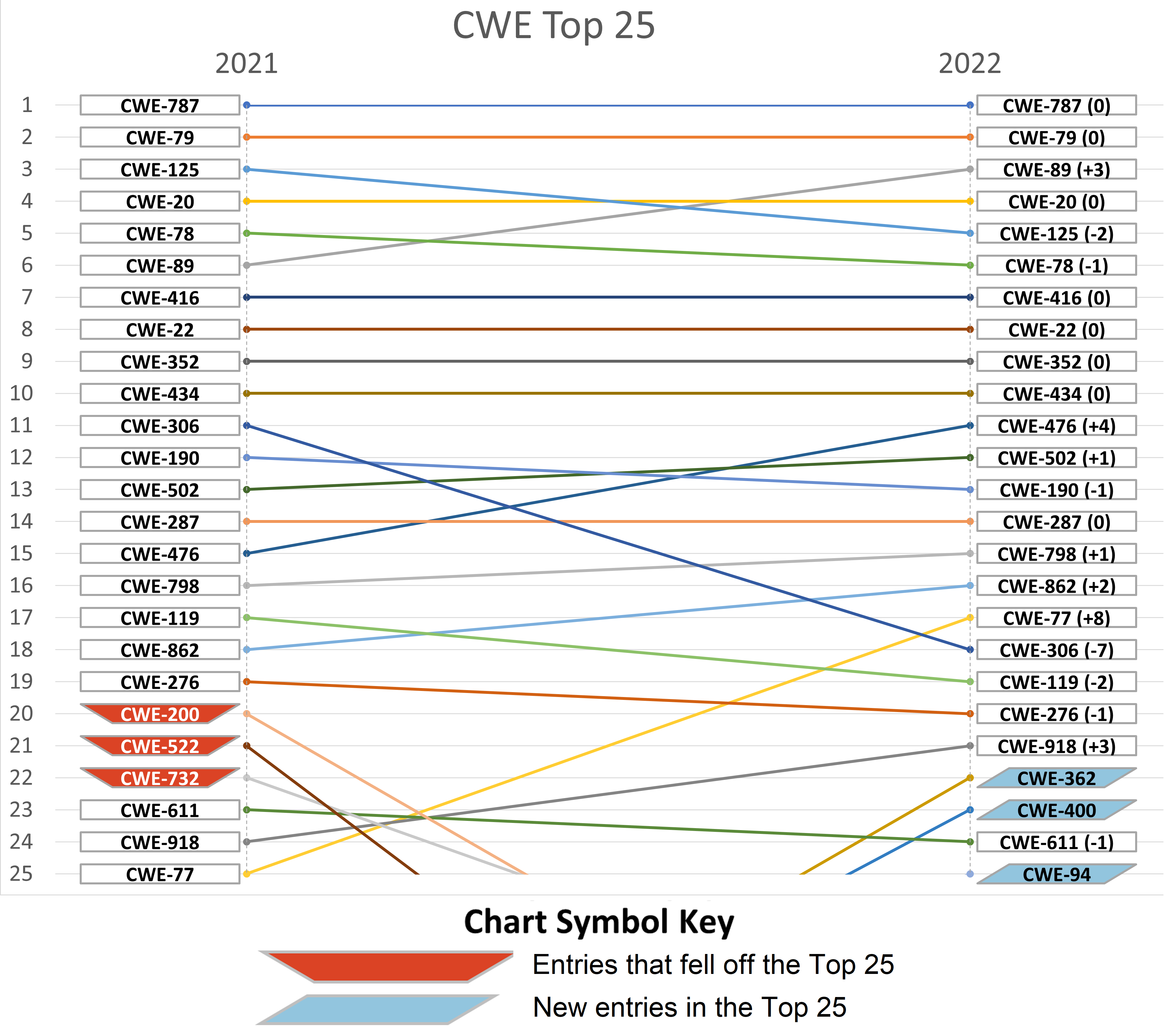 As with past years, there is a continued transition in the Top 25 to more specific Base-level weaknesses. While there is a slow decline in the number of unique Class-level weaknesses (from 9 in 2020 down to 7 in 2022), the percentage of all mappings used to generate the list has declined from 30% in 2020 down to 16% this year. Other levels for compound and variant weaknesses remain relatively unchanged. Data from 2019 is included for completeness, with 43% of all mappings going to classes, but this initial set of data had many categories, which is where the remapping analysis was focused; so, there was not as much extensive analysis of classes as in later years.

While 7 class-level weaknesses still exist in the list, they have declined noticeably in the ranking, as influenced by prioritization in the remapping task (see Remapping Task). This movement is expected to continue in future years as the community improves its mappings to more precise weaknesses.

This year's analysis created a mixture of class and base-level weaknesses to move up and down from the Top 25. This is expected because some of these classes are generally well-known with easy to identifiable keywords such as 'race conditions', 'command injections', etc. The CWE Program's goal remains to iteratively provide more specificity through Base-level weakness types in the Top 25. As can be observed, each year gets closer to that goal. The program's goal is that this trend will benefit users attempting to better understand and address the issues that threaten today's systems at a more operational level, as Base-level weaknesses are more informative and conducive to practical mitigation than higher, Class-level weaknesses.

For those who are interested in why these shifts happened, see the "Remapping Task" section to learn how prioritization of remapping activities affected the rankings.

After the data collection and remapping process, a scoring formula was used to calculate a rank order of weaknesses that combines the frequency that a CWE is the root cause of a vulnerability with the average severity of each of those vulnerabilities exploitation as measured by CVSS. In both cases, the frequency and severity are normalized relative to the minimum and maximum values seen. In the next section, these metrics are presented as "NVD Count" and "Avg CVSS", respectively.

For more specific and detailed information on the calculation of the 2022 Top 25 List, please see the Detailed Methodology.

The CWE Top 25 with Scoring Metrics

The following table shows the 2022 CWE Top 25 List with relevant scoring information, including the number of entries related to a particular CWE within the NVD data set, and the average CVSS score for each vulnerability mapped to a specific weakness.

Weaknesses On the Cusp

Per the scoring formula, these weaknesses were not severe enough or not prevalent enough to be included in the 2022 CWE Top 25.

Individuals who perform mitigation and risk decision-making using the 2022 CWE Top 25 List should consider including these additional weaknesses in their analyses because all weaknesses can become exploitable vulnerabilities under the right conditions:

To prepare the CVE/NVD data for analysis, the NVD entries were reviewed and the CWE mappings of these entries were "remapped" to the correct weakness, as appropriate. A "normalization" process converts selected weaknesses to the lowest-level CWE available in View-1003. For example, CWE-122: Heap-Based Buffer Overflow is not in View-1003, so it is "normalized" to its parent base-level weakness, CWE-787: Out-of-Bounds Write, which is in View-1003.

The following is an overview of the process:

In previous years, at the same time as the Top 25 release, the CWE-1003 view was also modified to ensure that it could still provide coverage for the most common CWE mappings. This created additional technical complexity for both NIST and the CWE Top 25 Team. In October 2021's release of CWE 4.6, View-1003 was updated to include CWE-1321, which was originally published in August 2020 and is a new entry to On the Cusp this year. However, View-1003 has not been updated for CWE 4.8. The CWE Team may update View-1003 for the CWE 4.9 release in Fall 2022.

Significant Changes to the Remapping Task in 2022

The Top 25 Team made several significant changes to the remapping task for 2022:

The Top 25 team downloaded KEV data on June 4, 2022. There were 280 total CVE Records with CVE-2020-nnnn or CVE-2021-nnnn IDs. Some had already been remapped as part of the 2021 Top 25 effort because they were for CVE-2020-nnnn Records. This year, the Top 25 team remapped the remainder of those KEV records including CVEs with keyword matches that were already consistent with NVD's own mappings. 10 CVEs were not fully remapped (mostly due to unresolved TODOs), so they inherited the original NVD mappings for the analysis.

The 270 remaps for this data set were then analyzed.

Limitations of the Remapping Task

After using this remapping methodology for the Top 25 lists from 2019 through 2022, some limitations have become apparent:

In the future, the remapping task might be changed to eliminate or mitigate these limitations.

Over the years, remapping by the CWE Team has revealed commonly cited CWEs that are either inappropriate, or not informative due to lack of sufficient details. These "problematic" CWEs make it difficult to tell from a large scale when some weaknesses are reduced as more-rare weaknesses arise. These problematic CWEs can have a significant impact on rankings within the Top 25 or any other CWE-based list.

While the Top 25 Team has not performed a formal data analysis on the most misused CWEs as revealed by remapping, the following CWEs are especially problematic:

Graphs of trends in Top 25 rankings are presented. Note that these include data from CVE-2017-xxxx to CVE-2021-xxxx (due to the 2-year sliding window for each annual Top 25 list.)

The first trend chart shows the significant changes from the 2019 Top 25 to the 2022 Top 25. Drops in high-level classes such as CWE-119 and CWE-200 are steep, while the shift and increase to Base-level weaknesses is most apparent for weaknesses such as CWE-787 and CWE-502. 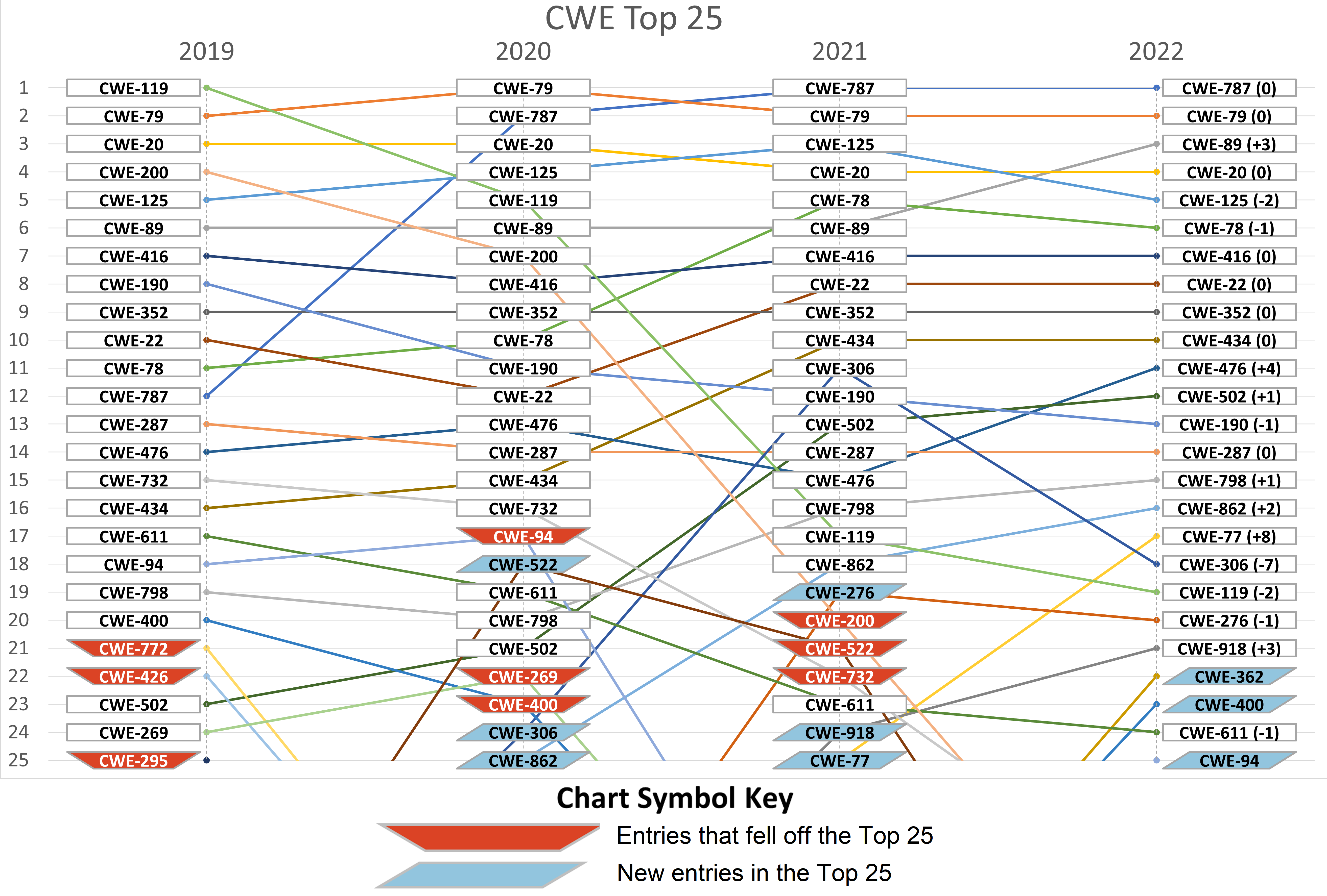 Opportunities for the Future of the Top 25

CWE is thrilled to share the 2022 Top 25 Most Dangerous Software Weaknesses with the community, and the team hopes the list, methodology, and supplemental information provides insight, value, and utility. For those interested in learning more about where the CWE team sees emerging opportunities and possibilities for future Top 25 lists, please visit the following sections on the Supplementary Details Page:

For additional technical and process details regarding this work, please visit the Supplementary Details Page. Summary of topics:

Past versions of the CWE Top 25 are available in the Archive.